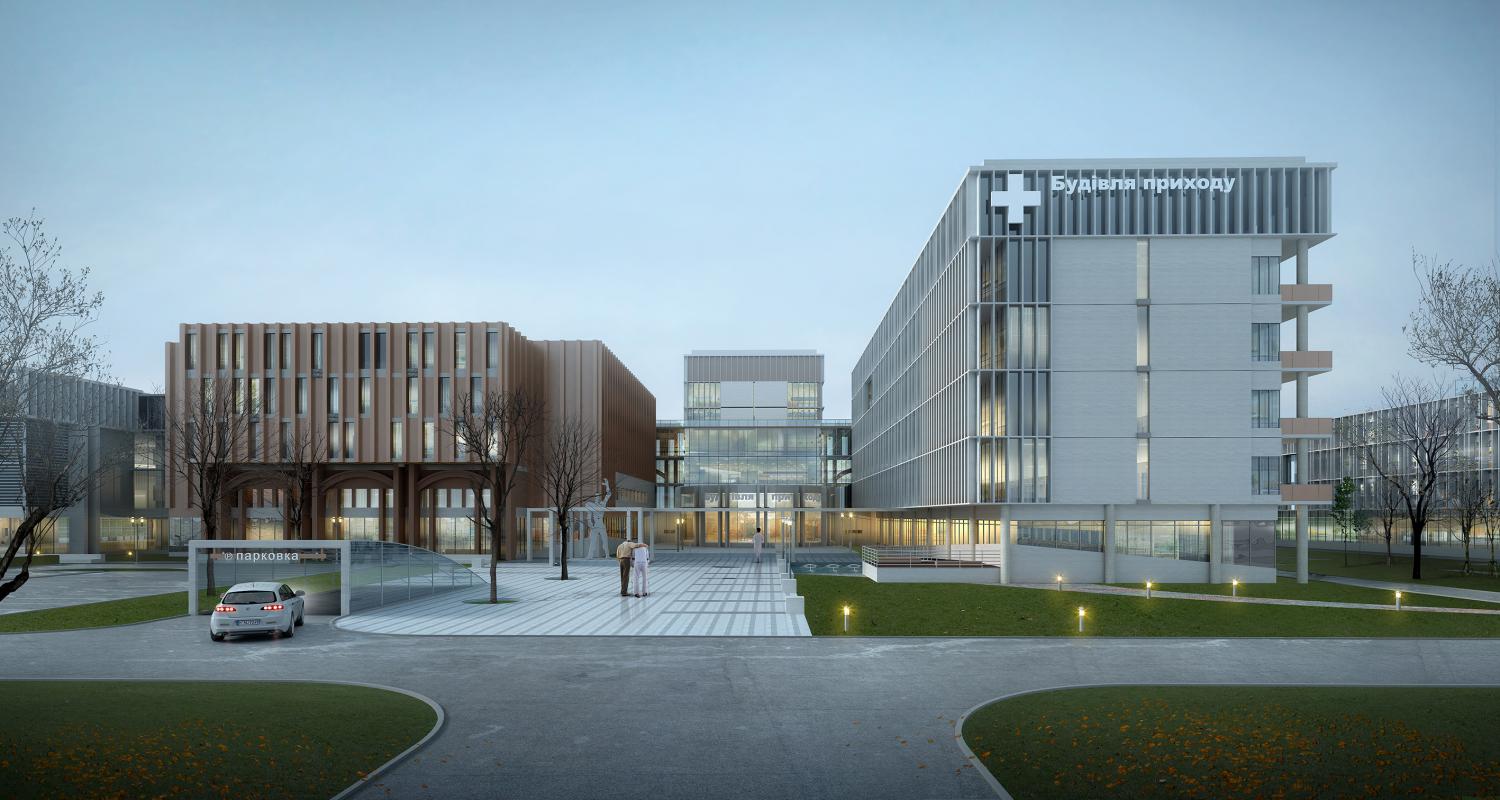 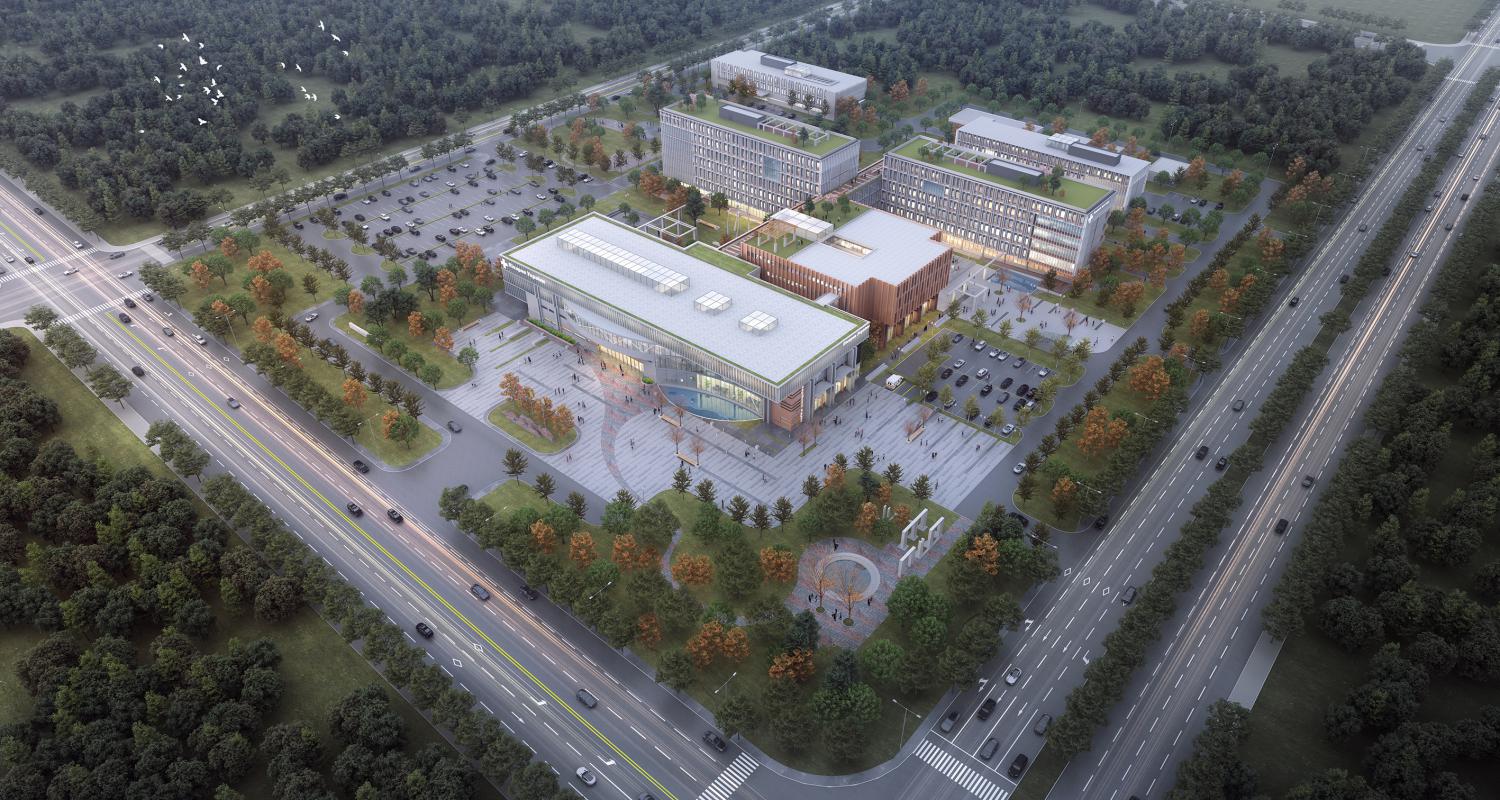 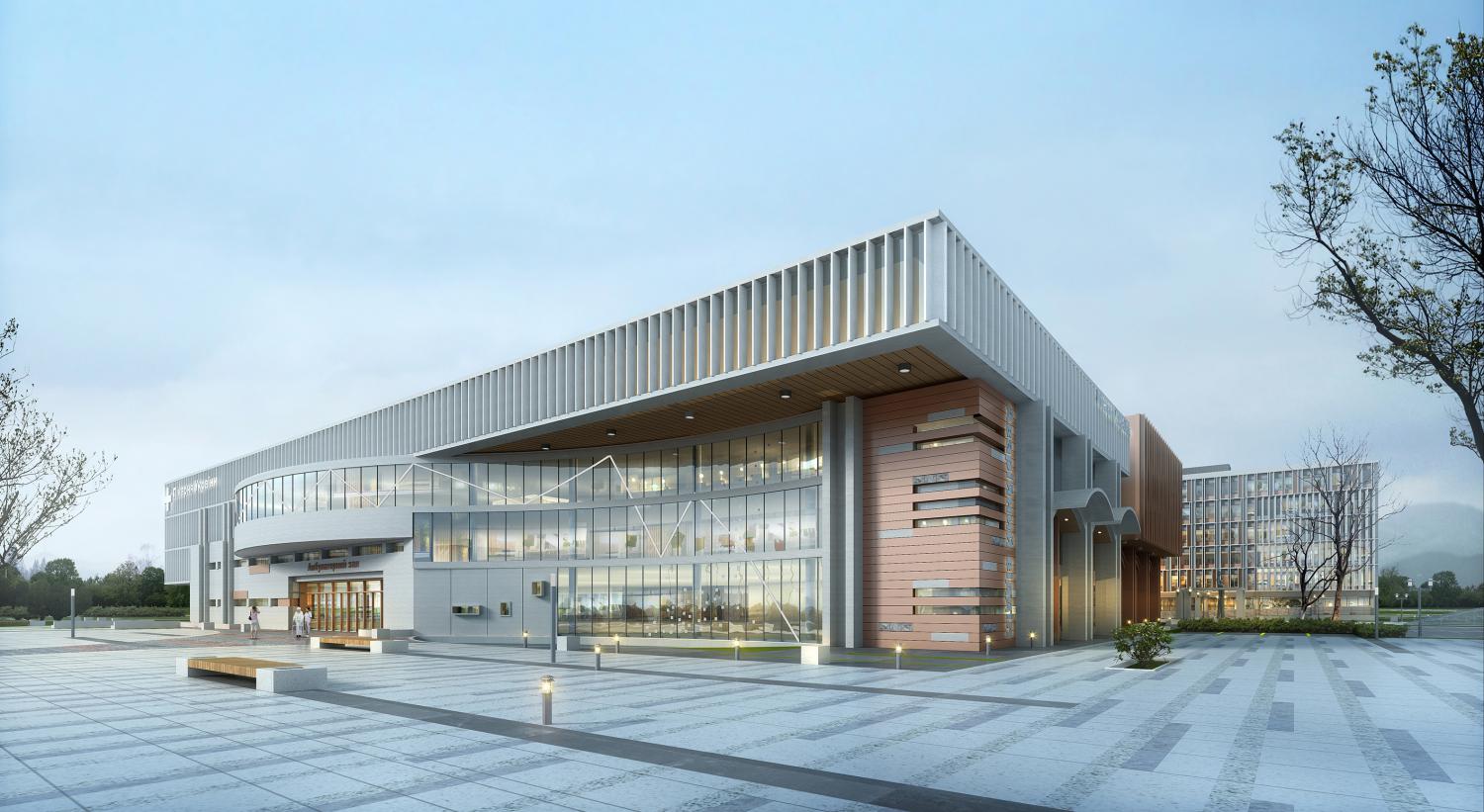 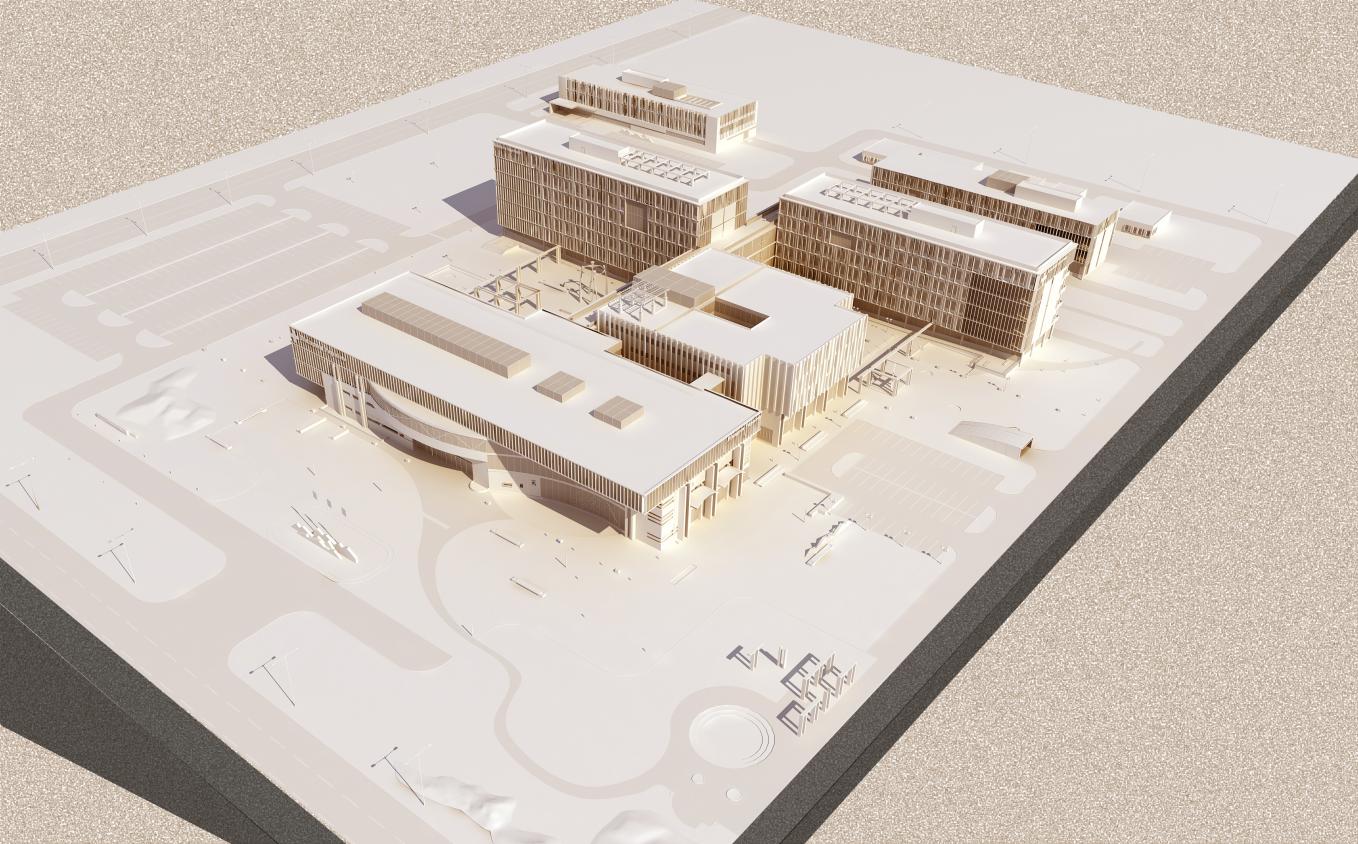 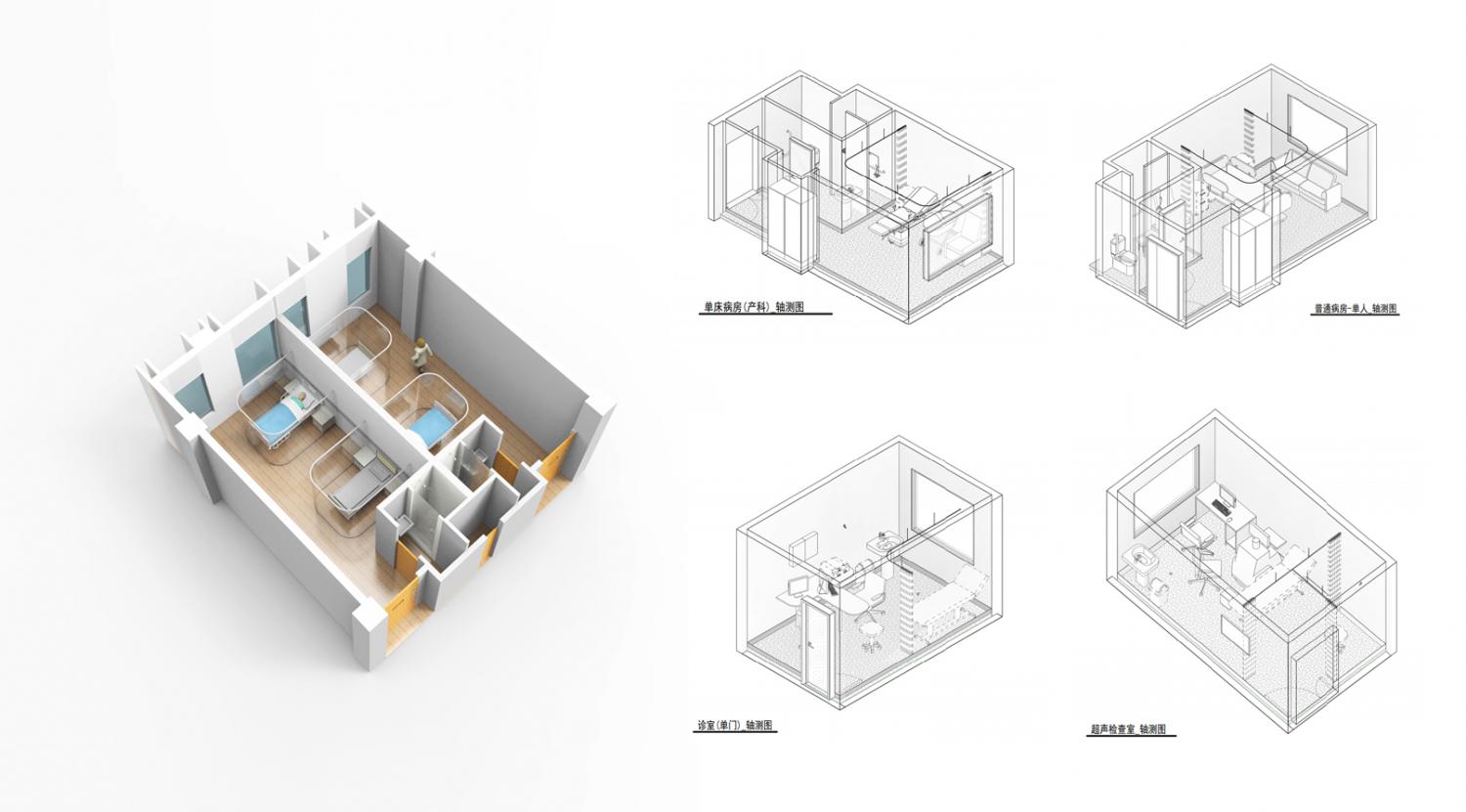 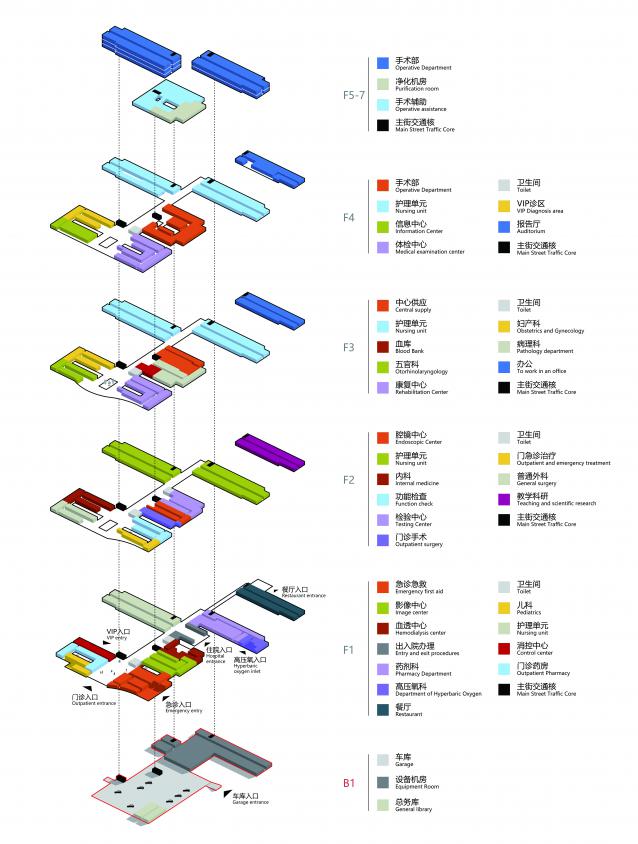 The Department of Surgery, Therapy, Infection, Ophthalmology, and Gastroenterology of the Department of Defense is a superior department with a complete emergency department, a surgical center with 10 level operating rooms, an independently installed infection medical building, and an advanced endoscope center. The overall goal of the project is to build the hospital into a first-class modern medical facility with reasonable functions, streamlined science, advanced technology and beautiful environment.

The historical architectural style of Ukraine was once deeply influenced by the European classicism (baroque) cubism and the brutalism of the architect Le Corbusier. Located in a temperate continental area, the building is dignified and deep, with a sense of sculpturality and distinctive regional features.

The original intention of the hospital design is to try to find a proper balance between traditional and modern design techniques, respecting the local history and culture and reflecting the architectural culture characteristics of the Ukrainian nation. The general plan is designed in the entrance of the outpatient hall and the inpatient department. The open front square is reserved in front of the emergency entrance. It is suitable for evacuation of people. At the same time, through the landscape and surface pavement, an effective spatial hierarchy is formed. The square elements are also European ancient buildings. An important part of the enclosed space is also an important part of Ukrainian urban fabric.

The street facade on the outpatient hall made an attempt to boldly modernize the language, breaking the traditional symmetrical layout. Through the partial curved glass curtain wall, the combination of the corner copper grid, the horizontal strip window and the vertical stone grille, it reflects the distinctive taste of the building. At the same time, after the local arc of the three-level waiting area is highlighted, the entrance canopy of the outpatient hall can be skillfully formed, which has a clear signification significance.

The inpatient department entrance forms a pleasant spatial sequence through the elaborate courtyard space organization, and at the same time reflects the spatial level of the Baroque architecture through the form of a double colonnade. The façade of the inpatient department is based on the standard of the hospital ward, and the modular composition method should be transported. (One room and two windows) emphasizes the vertical composition and reflects the vertical window order of European classical architecture. At the same time, the subtle changes in the size of the room through the partial room window reflect the visual interest of modern aesthetics after being grafted into the classical aesthetic. The building morpheme of the ward building has a large number of vertical slats, which is an important shading component to avoid glare inside the ward and an important element in European composition.

The medical technology part is in the whole building group. Because it is wrapped in the center of the group, it can form the “landmark” element. Therefore, the morphemes of the Baroque classical architecture are preserved in the treatment of the façade, and the partial cantilever is used to divide the proportion. Color changes form the respect and memory of Eastern European history. At the same time, different layers of interlaced windowing are both an attempt to break through the rules and an embodiment of internal functions. In the vertical proportion of the building, the golden ratio and the way of arch and continuous arches are used, so that the architectural language is both decorative and structural.

2 Building facade color and materials should be shipped

From the materials and colors, the design contains many elements, but it is reasonably and effectively unified: both stone and brick walls with a strong sense of history, and modern copper metal and glass curtain walls. The combination of the local wood color and the embellishment of the rough texture of the concrete reflects the profound influence of the ““Brutalism” architectural style on the history of Ukrainian architecture.

The combination of the space of the building group naturally forms the square and the inner courtyard space. The design of the landscape mainly starts from two perspectives: First, the surface of the public space in the street is partially changed, and the variegated red brick and the ivory white square brick are used as the color matching. Dark gray strips of stone are embellished. At the same time, the curved pavement of the square in front of the outpatient hall, and the open greening in the southeast corner are connected by a “strip”. Together with the sculptures of the square, it symbolizes the vast territory of Ukraine, the rivers and lakes, and emphasizes the entrance.

The second is that the introverted relatively private space processing should be designed with the opposite principle to the outside. Through the study of the geometrical rules of the ancient Roman royal courtyard, an effective sequence is formed. Through the different combinations of plants, the healing effect of the healing garden is achieved.

At the same time, the building design is designed in the two ward buildings of the east and west, and the roof garden is designed in part of the medical building on the north side of the office building to facilitate the seasonal use of doctors and patients and staff. At the same time, the top floor of the main street corridor is defined as the “rehabilitation street block”, which forms a traditional street effect and plays a role in relaxing the mood.

The fold line on the curved glass curtain wall of the building entrance is the image of the heart rate wave of the electrocardiogram. The illumination at night is not only good for the way finding of entrance of the hospital, but also represents a continuation of life. At the same time, the structural overhang of the southeast corner of the clinic symbolizes the potential power of current medical technology.

Like the ground paving, the architectural sculptures also have a certain symbolic meaning: The “mountain” essays in front of the outpatient hall symbolize the beautiful natural scenery of Ukraine; the “wrecked wall” in the southeast corner garden is the ancient Roman Reminiscence of the ruins of the Temple of the Temples; the “Corbusier” sculpture in front of the inpatient department is a force and a spiritual transmission that breaks away from the cage; the “hand in hand” sculpture in the healing garden on the west side also symbolizes a kind of Supernatural ability and belief in overcoming the disease. The whole building and landscape are full of warmth and strong medical and regional culture.